Pre-order your Christmas cheese and hampers now and save 10% using the discount code CHRISTMAS2020 at the checkout. All Christmas orders using this code will be delivered fresh the week commencing 21st December.

To support our British and European cheese makers in this difficult times we would like to ask you to pre order your cheeses and hampers to make sure cheese makers will produce correct amount which will help them this year. Pre-order now and receive your goods at Christmas time. 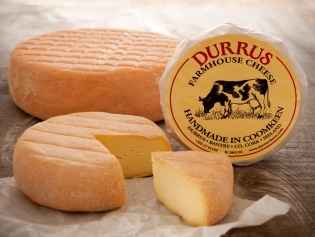 Durrus farmhouse cheese is an Irish raw milk (unpasteurised) cheese made by Jeffa Gill since 1979 in the upland valley of Coomkeen, West Cork. The cheese uses the fresh milk from the Frieshian herds of the local Buckley and Dukelow families, creating a semi-soft, natural rind-washed cheese to the original 1979 recipe.

The cheese is cut using a cheese harp, once it has been created in a traditional Swiss style copper cheese vat, and having had the curd cut away by hand in true artisanal cheese fashion. Durrus is hand turned five times before evening having been placed in moulds after being cut, and are then left to drain overnight. Parts of this process are accessible and can be watched through the viewing panels at the farm. Apparently the best time to visit is midweek around 11am, to see the most though it is advised to contact the farm beforehand to avoid disappointment.

Before reaching the curing rooms to be turned and hand washed, the cheese is first given a brine bath, and finally is left to slowly mature and develop.

Durrus cheese has a pale, light interior with a pinky, yellow-grey rind, which develops it’s own mould as the cheese matures, becoming increasingly crustier on the outside.

Initially the cheese was just sold from the farm, then later it’s character and local production saw it’s inclusion in local hotels and restaurants, and since 1987 Durrus cheese has been exported as far away as Japan and the USA, with continued exports to this day.

Durrus has received multiple awards including Best Semi-Soft, Best Farmhouse and Overall Supreme Champion in 2000 at the IFEX Awards and 2011’s Gold star award at the Great Taste Awards.

This cheese has a different all round taste depending on its age and stage of maturation. When young it is mild and creamy, a good behind the scenes cheese for cooking with. As it matures it becomes a deeper flavoured, fruity, stronger cheese. The odour also reflects this getting considerably stronger the older the cheese.

The Durrus has excellent melting qualities, it has been said similar to Raclette, so this cheese makes a mean fondue, or cheese on toast. But it’s also a great companion to fruit – particularly nice with pear – and used in green salad, tossed together with salad oils or vinegar dressings.

Generally speaking it’s best served at room temperature and enjoyed between five and eight weeks old. It’s best wine partnering is a Cabernet Savignon or Merlot for the younger end of the spectrum and a heartier Shiraz for the more mature cheese.