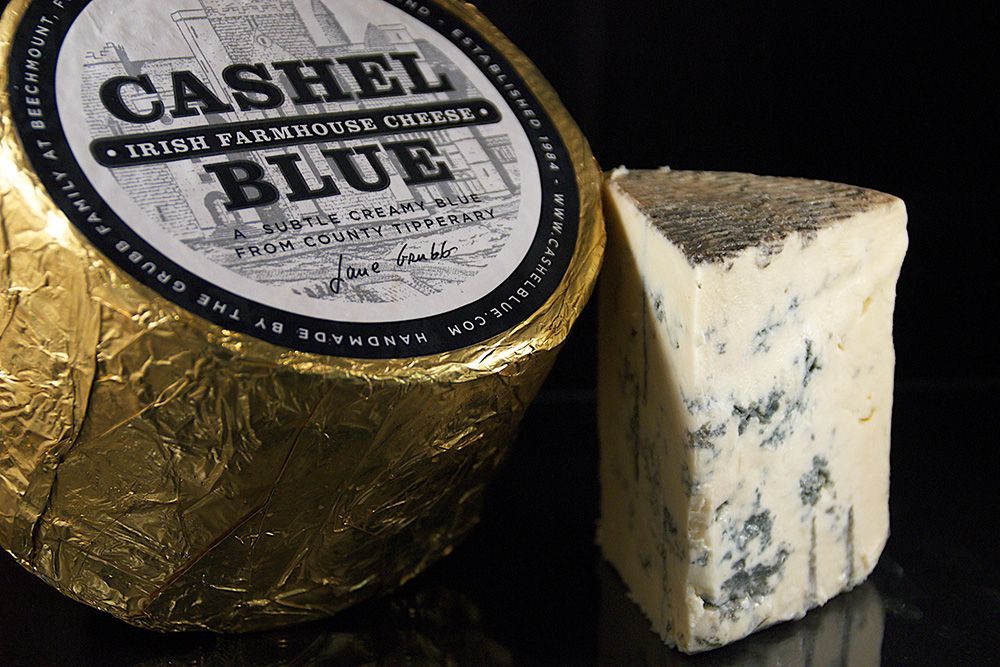 This semi-hard cashel blue cheese is a quintessentially Irish cheese made on the family farm of the Grubbs. The family have been farming and involved in agriculture in the county of Tipperary in Ireland since 1719 and named their cheese, developed in 1984, after the Rock of Cashel, where tradition has it that St Patrick started converting the pagan Irish to Christianity.

The Cashel Blue cheese is created with fully pasteurised milk, all produced either on the family farm or those close by, and can be bought at varying stages of maturation, starting from as young as 6-10 weeks. At it’s younger stages the Cashel Blue can be quite firm, becoming increasingly softer as it develops and ages.

Cashel is mild for a blue cheese, but has characteristic large blue flecks throughout creating a marble pattern with the blue veins. It is not dependant on season, but does improve when the cows are out to pasture for longer, and so the prime time for buying Cashel Blue is between the months of April and October.

Cashel Blue is a wonderfully creamy blue cheese with a mild and gentle, far from overpowering strength and much less salty than many other blue cheeses, though the rind can taste substantially more so than the paste underneath.

Younger versions of the Cashel Blue cheese tend to have a starker mouth watering tanginess brought on by the contrast of the creaminess and the slightly acidic and spicy intervention of the blue. This mellows into a rounded, richer and fuller flavour, complimented by the increased creaminess of the blue cheese as it reaches six months.

Cashel Blue is actually quite a pleasant gentle introduction to Blue cheese, so makes the perfect Blue Cheese addition to a cheese board, but it’s also incredibly versatile and works well with a plethora of dishes, especially a juicy steak, and has actually been served up in dishes in The White House and Downing Street.

Cashel Blue cheese is particularly good coupled with sweet additions, such as pecan nuts and natural honeys. It’s also well complimented by a glass of red Shiraz, or dessert wine, and a selection of either sweet fruits (apricots, figs or fresh pears) or savoury French, crispy baguettes or raisin toast.